This was a pretty cool issue. What I liked the most about it was what was not actually said or shown. Events were hinted at and implied, but not presented in detail. It leaves the imagination room to fill in the blanks. I like that in storytelling. I can really appreciate the freedom to bring my own ideas and interpretations to a story. As such, I will not give any details in this post. I suggest you read it, let the images inspire you, and then let your imagination roam.

The issue does conclude with a note that the next issue will be titled “The Last Days of Magneto!” This makes me wonder if the series is winding down. I guess we’ll see next month. Cheers!

In this issue, Magneto is attempting to establish a safe haven for mutants on Genosha. But the sense of safety is shattered as several mutants are brutally murdered and their blood used to paint a swastika on a wall. It’s quite grisly and reminiscent of something that the Manson clan would have done. The most powerful part of this installment, though, is Magneto’s musings regarding the symbol of the swastika.

In certain parts of the world… the swastika represents life, good fortune, and well-being. In Hinduism, it represents God. In ancient Tibet, it was the symbol of eternity. Navajo used the “whirling logs” in healing rites. For more than 3,000 years, the symbol stood for peace. And then the Nazi party adopted it as the emblem of their hatred and cruelty. Thousands of years as a positive icon… and man’s evil corrupted it… turned it into something most people cringe to look upon. Now, someone has brought the symbol here as the mark of death… the promise that the peace of Genosha will be despoiled once more. And now that I have seen it… the weight of its meaning nearly crushes me.

I like to think of symbols as something transcendent and eternal, but as I read this, I considered how easily humans can alter the meaning of a symbol. In addition, the meanings of symbols can change naturally. But regardless, symbols are objects of power and they can evoke deep emotion. We should always remember to never underestimate the power of a symbol.

Thanks for reading my thoughts. Cheers!

This is the first part of a mini-series featuring the Red Skull. He is a pretty nasty character who runs a concentration camp for mutants. Magneto experiences a series of memories from when he was in a Nazi concentration camp. During his incarceration there, he was forced to load bodies into the furnaces. These memories cause him to act recklessly as he feels that stepping forth to challenge the Red Skull will constitute making amends for his acquiescence and his failure to fight against the Nazi atrocities.

Memories can be terrible tormentors. For a long time, I was tormented by the memories of things I did, and failed to do. It is easy to look back at our past and imagine how we could have or should have done things differently. But I eventually figured out that it serves no purpose. The past is the past. At best, we can learn from our mistakes. Obsessing about what happened serves no purpose. It is easier said than done, and I often find myself slipping back into self-obsession, but I usually recognize this when it happens and can change my thinking. The truth is, it’s much easier to change your thoughts than it is to change the past.

Comments Off on Magneto: Issue #9

While this issue is less interesting for me than Issue #3, it is still good and serves to move the story forward. Essentially, Magneto is remembering his fight against the self-righteous “Purifiers” who sought to do God’s work by purifying the world of mutants, who they viewed as the offspring of the Devil.

Magneto draws upon his memory to give him strength to face his impending challenges.

I remind myself… while nature might strengthen my spirit… it is just as vital to my efforts to strengthen my mettle…to sharpen the weapons I need.

The weapons he refers to are his resolve, commitment, and perseverance. He feels alone, like he is the only one fighting to protect his kind. And while it would be easy to give up, he knows he must forge on, and it is the memory of those who have died before him that spurs him forward.

It’s strange. Earlier today I was talking about how difficult it is to continue fighting for a cause which seems insurmountable. After years of trying with few or no positive results, how can one continue the struggle? One begins to feel like Sisyphus. As I think about Magneto in this issue, I see him as undertaking a Sisyphean task, as yet another incarnation of the archetype of the one who struggles on, regardless of the outcome.

Comments Off on Magneto: Issue #4 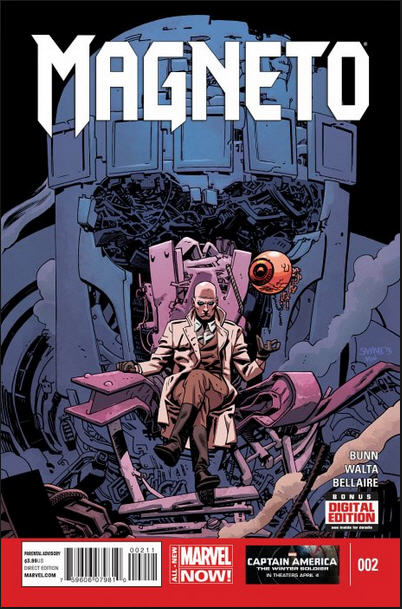 It took me a little while to acquire a copy of this comic, because it kept selling out. I finally was able to get a second printing of the issue, and it was worth the wait.

Magneto is such a complex character, which makes him so much more interesting than most of the other X-Men characters (yes, I’m looking at you, Wolverine). It’s the depth of his character and the nuances of his personality that I find so fascinating.

In this issue, Magneto visits a tent city to find clues to who is abducting people and turning them into Omega Sentinels, which then hunt down and kill mutants. I lived in Miami during the time of the tent city there, and Magneto’s observations as he walks among the tents brought those memories back to me.

Dozens of haphazard structures standing close together in hopes of faking a community. A tent city for people who don’t have anything else. Men, women, children. Families. Abandoned by society. Forgotten unless someone actually bothers to pay attention. And if that happens, they’ll be routed. Or worse.

This issue also includes some great flashbacks to Magneto’s childhood living in the Warsaw ghetto under the Nazi occupation. His experiences under Nazi oppression directly impact his development as an adult. Events, particularly traumatic ones, affect the courses of our personal paths in life. There is a question about whether hardships server to teach you life lessons, or whether they end up eating away your insides. At the end of the issue, Magneto concedes that for him, it is both.

But bad times teach you lessons, and they eat you alive, just as hopelessness can crush your spirit, and turn you into a monster.

Comments Off on Magneto: Issue #2