First off, I find it weird that Chuck Berry and Chuck Barris died within a week. Their names as so similar it is just an odd coincidence.

Anyway, I met Chuck Barris at a reading when he came out with The Big Question. The book is good, kind of a dystopian view of TV game shows, something he would know about. During the Q-and-A session I asked him what the most outrageous act was that he ever had on The Gong Show. He told me it was The Popsicle Twins. They put them forth assuming the censors would be so offended they would ban them and then they would be able to slide some borderline acts under the radar, but lo and behold, they were not censored. Of course, I went right home and looked up “Gong Show Popsicle Twins” on YouTube. Yeah… it’s exactly what you expect. But the commentary from the judges is priceless.

After the reading and discussion, Chuck was kind enough to sign the copy of my book. 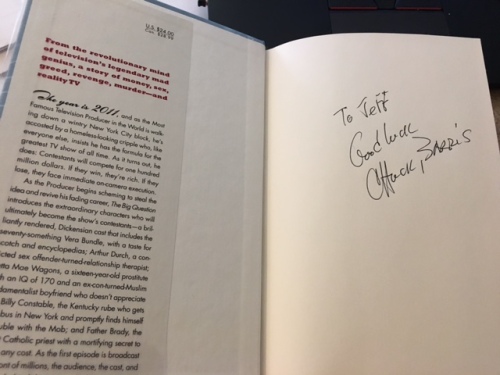 While I do not consider him a literary great, and some people would go as far as saying he decimated culture, but I still consider him an icon of popular culture. If you grew up in the 70’s like I did, there was no escaping The Gong Show and the impact it had. And then there is the question raised in his autobiography, Confessions of a Dangerous Mind. Was he also a CIA operative? The CIA denies this claim, but isn’t that exactly what the CIA does–deny allegations? I suppose we will now never know the truth.