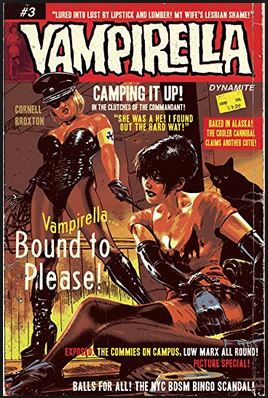 This issue could have been called “Campirella.” It’s a nod to the pulp fiction genre that began in the late 1800s and continued through the 1950s. The artwork, style, and content all recall the campiness of the genre.

Pulp magazines (often referred to as “the pulps”) were inexpensive fiction magazines that were published from 1896 to the 1950s. The term pulp derives from the cheap wood pulp paper on which the magazines were printed; in contrast, magazines printed on higher quality paper were called “glossies” or “slicks”. The typical pulp magazine had 128 pages; it was 7 inches (18 cm) wide by 10 inches (25 cm) high, and 0.5 inches (1.3 cm) thick, with ragged, untrimmed edges.

The pulps gave rise to the term pulp fiction in reference to run-of-the-mill, low-quality literature.

Pulps were the successors to the penny dreadfuls, dime novels, and short-fiction magazines of the 19th century. Although many respected writers wrote for pulps, the magazines were best known for their lurid, exploitative, and sensational subject matter. Modern superhero comic books are sometimes considered descendants of “hero pulps”; pulp magazines that often featured illustrated novel-length stories of heroic characters, such as The Shadow, Doc Savage, and The Phantom Detective.

Growing up, there were still pulp magazines available at the local stationary store. I used to read the campy detective magazines, as well as the graphic horror and science fiction. Although these publications were deemed the antithesis of literature, they did foster a love of reading for me which continues to this day.

There is something disturbingly timely in this bizarre throw-back issue. Vampirella is imprisoned in a concentration camp along with a variety of other individuals deemed to be social deviants. This included people of different ethnicities, LGBTQ persons, as well as individuals of different religious beliefs. And while the work camp is clearly a reference to the Nazi concentration camps, the people who are imprisoned there are the same groups who are currently being targeted here in the U.S.

At one point, the Commandant tells Vampirella why there will always be people to keep the factory running.

We have the world to choose from. There will always be malcontents.

The terrible truth of this statement is that a fearful and intolerant society will always find individuals and groups to direct their hatred and fear toward. Humans continue to exploit those who they see as different, and blame the “others” for their difficulties. Hopefully, one day we will transcend this cycle, at which point magazines like this will become a curiosity instead of a sad social commentary.