“The Way of Zen” by Alan Watts 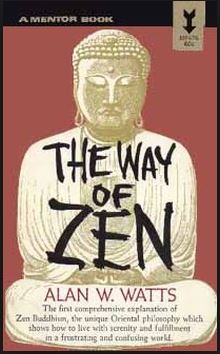 This book has been on my shelf for a really long time (price on cover is .60¢). In fact, this was my dad’s book, and I suppose I somehow came to possess it. Anyway, I reached the stage in my life where I felt now was the time to read it. I am a firm believer that we read books exactly when we are supposed to read them.

I have been maintaining a daily meditation practice for a while now, and I feel that this book has re-centered me on the path. There is a wealth of insight in this book, and regardless of where you are on your individual journey, I am certain that you will benefit from reading this book. That said, I want to share a few of the many quotes that I connected with.

Every positive statement about ultimate things must be made in the suggestive form of myth, of poetry. For in this realm the direct and indicative form of speech can say only “Neti, neti” (“No, no”), since what can be described and categorized must always belong to the conventional realm.

The spiritual experience is ineffable. For this reason, we can only express an approximation of the experience through the symbolism of myth, poetry, and other art forms. I personally find music to be one of the best vehicles for expressing the mystical or spiritual, because it conveys pure emotion and energy, without the baggage of words and the associated interpretations. Although, there is no shortage of poetry that does an amazing job of expressing the inexpressible.

Another passage that I found deeply interesting discussed nonduality as defined by Buddhists and Hindus.

Thus his point of view is not monistic. He does not think that all things are in reality One because, concretely speaking, there never were any “things” to be considered One. To join is as much maya as to separate. For this reason both Hindus and Buddhists prefer to speak of reality as “nondual” rather than “one,” since the concept of one must always be in relation to that of many. This doctrine of maya is therefore a doctrine of relativity. It is saying that things, facts, and events are delineated, not by nature, but by human description, and that the way in which we describe (or divide) them is relative to our varying points of view.

This was like a bolt of lightning for me. In everything that I had read which mentions nonduality, I always associated it with One. Now I understand that this is just another layer of illusion, essentially my mind using my limited set of symbols to try to grasp something that is well beyond the reach of my conventional thinking. Just as the yin cannot exist except in relation to the yang, so my concept of a divine One can only exist in contrast to my concept of many, and both fail to express the entirety of reality, which is the nondual. I can see that I will be spending a lot of time contemplating this in days to come.

The state of heightened awareness is something that is equally as impossible to describe as the One, but Watts includes a quote from Sokei-an Sasaki that does a great job in describing that indescribable sensation that one occasionally experiences while meditating.

One day I wiped out all the notions from my mind. I gave up all desire. I discarded all the words with which I thought and stayed in quietude. I felt a little queer—as if I were being carried into something, or as if I were touching some power unknown to me . . . and Ztt! I entered. I lost the boundary of my physical body. I had my skin, of course, but I felt I was standing in the center of the cosmos. I spoke, but my words had lost their meaning. I saw people coming towards me, but all were the same man. All were myself! I had never known this world. I had believed that I was created, but now I must change my opinion: I was never created; I was the cosmos; no individual Mr. Sasaki existed.

Reading this reminds me of the quote from William Blake’s “The Marriage of Heaven and Hell”: If the doors of perception were cleansed everything would appear to man as it is, infinite. Everything, including ourselves, is infinite, and therefore, part of the nondual, and beyond our ability to express in this constructed reality.

To sum up, Zen, like all spiritual paths, is a journey, without beginning and without end. But the joy of being on the path is in the traveling of the path itself.

. . . Zen has no goal; it is a travelling without point, with nowhere to go. To travel is to be alive, but to get somewhere is to be dead, for as our own proverb says, “To travel well is better than to arrive.” 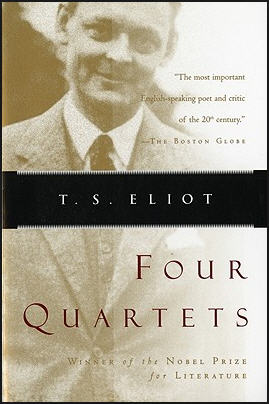 I read T.S. Eliot’s Four Quartets early on in college and really didn’t grasp it. I think the fact that I read it on my own and not as part of a class was what made it difficult for me to grasp. Anyway, I decided to read the collection of poems again and to write about them one at a time. So this is my first of four posts on the Four Quartets.

“Burnt Norton” is a poem about time, essentially, the cycle of time and how the past and the future relate to the present. I found it to be very spiritual and it seems to me that Eliot was drawing inspiration from Eastern religions. The language and the metaphors he uses conjured images of a mandala, where the present is the center and the past and future revolve around, folding into and out from the central point. 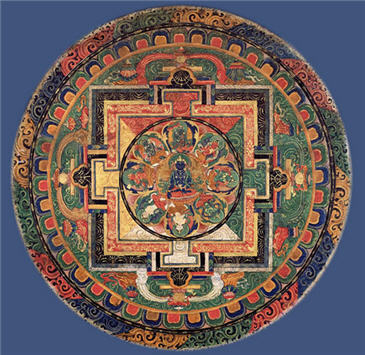 From the poem’s opening lines, you immediately get the sense that time is not linear.

Time present and time past
Are both perhaps present in time future,
And time future contained in time past.
If all time is eternally present
All time is unredeemable.

There is a definite impression that everything that ever was and everything that will come into being already exists in the now. Time is relative to our point of existence in the universe. The infinity of possibilities extends in every direction, emanating from our point in space.

Since time and possibility surrounding us is infinite, there is no way that our consciousness can grasp its depth. As Eliot expresses in the following lines, we are only able to grasp an infinitesimal amount of reality, and that is symbolized by the present.

Go, go, go, said the bird: human kind
Cannot bear very much reality.
Time past and time future
What might have been and what has been
Point to one end, which is always present.

Since we cannot fully grasp the past or the future, since both are infinite, all we can do is focus on the present. The only thing we can grasp completely is the moment in which we exist. In order to do this, one must still the mind, as expressed in the following lines.

So in order to become fully conscious, we must transcend time. The way that we transcend time is through meditation. When we enter a deep meditative state, time is no longer linear. Everything exists within the single moment of our awakened consciousness. At that point, the past and the future become one with the present in our psyches. This is the only way that we can truly comprehend time and existence.

Later in the poem, Eliot offers a great description of how it feels to enter the deep meditative state.

As I read these lines, I recalled experiences I have had while meditating. There is a sense that you lose touch with the world around you, and yet, at the same time, you are fully connected with the world and with all existence within that one moment. It is something that is very hard to describe because it transcends our ordinary reality. The closest you can come to expressing that feeling is through poetry, and Eliot does a great job here.

There is much more to this poem than what I have covered here; for example, I noticed symbolism of time as an eternal circle which I personally associate with the ourosboros. In addition, the number 10 appears in the poem which for me is a very mystical number. Finally, there are references to various Eastern and Western mystic traditions. Any of these could be explored deeper in another post. But I will leave some for you to explore. I encourage you to read this poem, even if you have read it before. It is deeply spiritual and profoundly inspiring.