Initial Thoughts on the Qur’an 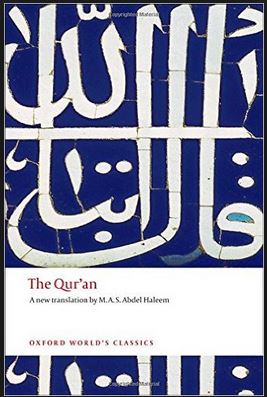 I’m about halfway through the Qur’an and I’ve been taking notes, waiting, and thinking about the text before starting to write. At this point, I feel ready to share some initial thoughts on the text. Let me start off by saying, though, I am not a religious scholar, just someone who is interested in all spiritual texts. My thoughts are just my own impressions and I hope they do not offend anyone. It’s certainly not my attention. I just felt that I could not participate in discussions without having first read the text myself.

The first thing that struck me about the text is the emphasis on being mindful of God. Throughout the text, God tells people to be mindful of him and to remember the things that God did in the past.

Children of Israel, remember how I blessed you. Honour your pledge to Me and I will honour My pledge to you. I am the One you should fear. Believe in the message I have sent down confirming what you already possess. Do not be the first to reject it, and do not sell My messages for a small price: be mindful of Me.

It is told that those who are mindful of God will receive blessings for doing so.

If the people of those towns had believed and been mindful of God, We would have showered them with blessings from the heavens and the earth, but they rejected the truth and so We punished them for their misdeeds.

In addition to being mindful of God, God promising to punish those who do not follow his laws is another recurring theme in the text so far.

Many messengers before you [Muhammad] were mocked, but I granted respite to the disbelievers: in the end, I took them to task—how terrible My punishment was!

While there are some beautiful and inspiring passages, which I will explore in future posts, much of what I have read so far has been God dictating what a person should and should not do, accompanied by promises of blessings for obedience and the threat of eternal punishment for those who do not adhere to the scripture. I personally have difficulty believing in an all-powerful God who metes out punishment to those who do not adequately worship him. So I read this from the perspective of karma, that those who incorporate spiritual values into their lives will reap spiritual rewards, and those who follow the more negative paths will have to deal with the consequences that manifest as a result of their actions. For me, that is the underlying spiritual message in regard to God’s blessings and punishment.

Thanks for stopping by, and I will try to get another post up soon.