Thoughts on “Winter Dream: to… Her” by Arthur Rimbaud

One winter, we’ll take a train, a little rose-colored car
Upholstered blue.
We’ll be so comfortable. A nest
Of wild kisses awaits in every cushioned corner.

You’ll close your eyes to shadows
Grimacing through windows
This belligerent nocturnal realm, inhabited
By black demons and black wolves.

Bending your head backwards, you’ll say: “Get it!”
―And we’ll take our time finding the beast
―While it roams…

The footnote to this poem states: Written on a train, 7 October 1870. With that in mind, I interpret this poem as an expression of a sexual fantasy experienced while riding alone on a train. I picture a young Rimbaud, gazing out the window as landscape streams by, imagining himself lost in a loving embrace.

What strikes me as most interesting about this poem is that it seems to blur the distinction between fantasy and physical sensation. The fantasy does not seem to be limited to the mind but is experienced throughout the body. It is like Rimbaud has taken sexual fantasy to a next level where the thought turns to feeling.

The last two lines of the poem I find particularly interesting. The metaphor of the roaming beast can be interpreted in two ways. First, it could represent the mind lost in fantasy. What is intriguing about this possibility is that Rimbaud imagines that fantasy would be taking place during the physical encounter. This is a boldly honest observation, because Rimbaud is essentially admitting that he can get lost in fantasy, even during his most intimate moments. The other interpretation is that the roaming beast symbolizes our primal sexual drive, an animalistic urge which cannot be controlled, and which will roam freely, regardless of however hard we try to rein in our desires. Personally, I feel that both interpretations are valid, which adds richness to the closing stanza of this poem.

I hope you enjoyed this poem and found my interpretation helpful. As always, feel free to share your thoughts in the Comments section. Cheers!

“To Music” by Arthur Rimbaud

I decided to read something a little different today, so I got my complete collection of works by Rimbaud, translated by Wyatt Mason down from the shelf and flipped through. It is, by the way, an excellent book and I encourage you to invest in a copy.

Because I have been thinking about music a lot lately, the poem “To Music” caught my attention. I am including Mason’s translation here for reference purposes only and to provide context for my analysis of the poem.

Pruned into stringy plots of grass, the public square,
Where trees and flowers and everything is just so,
Finds wheezy bourgeois strangling in the heat,
Trotting out petty jealousies on Thursday nights.

—The military band, in the middle of the garden,
Balance their shakos while playing the “Waltz of Fifes.”
—Around them, in the first rows, dandies strut,
The notary hangs from his own monogrammed fob.

Women wearing ruffles like advertisements
For themselves flounce like elephant wranglers
Around bloated bureaucrats and bloated wives:
Petty bourgeois with lorgnettes hang on every clinker;

On green benches, clubs of retired grocers rest
Poking the sand with knobbed canes,
Discussing treaties with great sobriety,
Taking snuff from their silver boxes, saying: And so…!”

Spreading the roundness of his rump across the bench,
A bourgeois with bright buttons and a Flemish gut
Savors his pricy Onnaing pipe overflowing with tobacco:
“This stuff’s still illegal, don’t-you-know?”

All along the green lawn, little hoodlums sneer;
Naïve young soldiers smoking roses,
Made lovesick by the sad trombones,
Pat the heads of babies to charm their nannies….

Me? Looking like a scattered student
I follow exuberant girls through the green chestnuts:
They know I’m there, and turn towards me
Laughing, eyes brimming with indiscretion.

I don’t say a word: I just stare at the flesh
Of their white necks framed by tresses:
I follow the curve of their shoulders down
Their divine backs, hidden by bodices and flimsy finery.

Soon I’m ogling their boots and socks…
Burning with fever, yearning for flesh.
They think I’m silly. They whisper to each other…
—And I feel kisses blossom on my lips…

The poem describes Rimbaud’s impression of a day at the Railway Square in his childhood home town of Charleville. While a band is playing music, Rimbaud observes and comments on the bourgeois loafing around the park. You get a sense of Rimbaud’s disdain at the superficial qualities of these people. They are almost alien to him, absorbed into their own worlds and oblivious to what is going on around them.

The tone of the poem shifts about halfway through and becomes more reflective. He begins to fantasize about the girls he sees, and I get the feeling that these fantasies are fueled by the music. It is a strange combination of lust and innocence, something that is familiar to most adolescent males.

Overall, I really liked this poem. It is a great combination of impressionism and personal reflection, and Mason does an amazing job of capturing the cadence of the language in this translation. 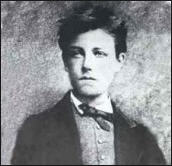 While the red-stained mouths of machine guns ring
Across the infinite expanse of day;
While red or green, before their posturing King,
The massed battalions break and melt away;

And while a monstrous frenzy runs a course
That makes of a thousand men a smoking pile-
Poor fools! – dead, in summer, in the grass,
On Nature’s breast, who meant these men to smile;

There is a God, who smiles upon us through
The gleam of gold, the incense-laden air,
Who drowses in a cloud of murmured prayer,

And only wakes when weeping mothers bow
Themselves in anguish, wrapped in old black shawls-
And their last small coin into his coffer falls.

This is a very intense poem and I see it as a strong critique against tyrannical rulers who abuse their power, particularly those associated with the Catholic Church. Rimbaud sees this as the ultimate evil, to commit murder in the name of God, or to gather money from mourning mothers to bolster wealth. And it seems as if he is making a connection between the two, that young men are being sent off to die in the name of God and King, and then the mothers of the dead soldiers are exploited, manipulated into giving up their money in the hope that doing so will secure a place in Heaven for their dead sons.

The one part of this poem that puzzled me was the reference to red and green. After doing a little research online, I came up with two possibilities. The first is that Rimbaud was referring to the hussars, a regimen of soldiers who fought under Napoleon. According to Wikipedia: “Hussars were notoriously impetuous, and Napoleon was quoted as stating that he would be surprised for a hussar to live beyond the age of 30 due to their tendency to become reckless in battle, exposing their weaknesses in frontal assaults. The hussars of Napoleon created the tradition of sabrage, the opening of a champagne bottle with a sabre.” Anyway, the hussars wore green and red uniforms.

The other possibility is that Rimbaud was referring to the colors of liturgical vestments worn during Catholic services. In that period, different colors were worn for different liturgies, and red or green vestments were fairly common colors, depending upon the service. (Source) It is also possible that he was referring to both.

I am inclined to agree with Rimbaud’s thoughts. People who use their power to exploit others are the embodiment of evil. Unfortunately, this is something that still occurs today. But, on a more optimistic note, I think society is less tolerant of people who abuse their authority, and that bodes well. 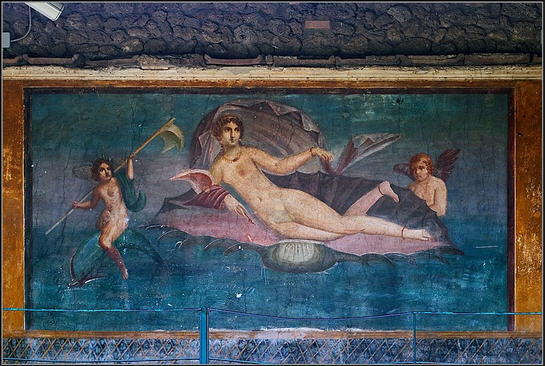 This morning I took my copy of Rimbaud Complete from my shelf and flipped through it. I came upon this poem and decided to read it. Since it is a translation, I am including the text here.

As if from a green tin coffin, a woman’s head
Rises from an old bathtub, slow and dumb,
Hair greased back to hide bald patches
And not succeeding very well;

First: a fat gray neck, jutting shoulder blades,
A squat back with all kinds of curves;
Then: her heavy hips begin and never seem to end;
Folds of fat shift beneath her skin:

Her spine’s a little raw, and the whole mass
Reeks; above all, you notice irregularities
Better appreciated under a microscope…

Two words are engraved across her ass: Clara Venus;
–And then her body shifts and offers up her ample rump
For a view: a repellant frame for the ulcer on her anus.

In the poem, Rimbaud takes a common artistic theme—the birth of Venus from the ocean—and gives it a more human twist. Venus is the symbol of female physical beauty which has become the ideal in Western culture. But how accurate is this image? Women frequently end up starving themselves or surgically altering their bodies in an attempt to meet this idealized construct of what is beautiful.

It speaks volumes about our culture that some 2000-year-old idealized image of what female beauty is supposed to be still dominates our views. We can thank our media for helping keep this ideal alive.

I woke this morning and thought about what I should read and write about today. I decided I would pick something from Rimbaud. I purchased a copy of his complete works some years back and read it all, so I figured I would select a short poem to read again. The second poem in the book is “Sensation” and it seemed the perfect choice. Since it is a short poem and online translations vary from site to site, I figured I would include the version I read here.

Through blue summer nights I will pass along paths,
Pricked by wheat, trampling short grass:
Dreaming, I will feel coolness underfoot,
Will let breezes bathe my bare head.

Not a word, not a thought:
Boundless love will surge through my soul,
And I will wander far away, a vagabond
In Nature–as happily as with a woman.

This poem is a celebration of sensory experience. It is about the joy and pleasure of physical sensation. Rimbaud seeks to lose himself and escape his thoughts through immersion in the sensory. When he reaches that state of physical bliss, when “Not a word, not a thought” is running through his mind, he becomes one with his soul, an experience he compares with the state of sexual orgasm attained with a woman.

There is a nice double entendre near the end of the poem, where Rimbaud describes himself as “a vagabond in Nature.” This could be interpreted as either Rimbaud being a wanderer exploring the natural and physical world around him, or it could mean that it is the nature of his being to wander the world, experiencing the sensations that life has to offer.

I think Rimbaud is a very cool poet. His works heavily influenced the writings of rock poets like Patti Smith and Jim Morrison, individuals who influenced me when I was younger. If you are unfamiliar with Rimbaud’s works, I recommend investing in a copy of his writings.