“A Former Life” by Charles Baudelaire 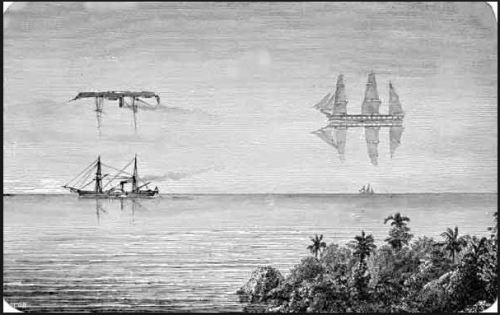 Long since, I lived beneath vast porticoes,
By many ocean-sunsets tinged and fired,
Where mighty pillars, in majestic rows,
Seemed like basaltic caves when day expired.

The rolling surge that mirrored all the skies
Mingled its music, turbulent and rich,
Solemn and mystic, with the colours which
The setting sun reflected in my eyes.

And there I lived amid voluptuous calms,
In splendours of blue sky and wandering wave,
Tended by many a naked, perfumed slave,

Who fanned my languid brow with waving palms.
They were my slaves–the only care they had
To know what secret grief had made me sad.

There are two main metaphors in this sonnet: the sky and the sea. The sky represents the real world and the sea symbolizes the poet’s memory and the source of his artistic expression.

In the second stanza, the relationship between the two is established. Baudelaire’s creative mind reflects his experiences through memory. All his thoughts and feelings swirl and undulate in the sea which is his imagination. The result is his poetry, which is a reflection of his collective experience.

The slaves in the final two stanzas can be interpreted in two ways. In his former life (the one symbolized by the sky and based upon actual experiences), they are likely prostitutes with whom Baudelaire sought solace from his loneliness and pain. But if the slaves are populating the creative and imaginative part of his psyche, then they likely represent his individual poems. Baudelaire would have viewed his poems as exotic vessels into which he could pour his “secret grief.”