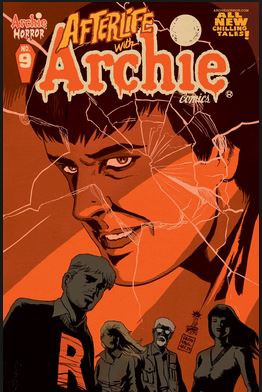 It’s been a year since the last Afterlife with Archie comic, and this one hits you like an unexpected sucker punch. It reads like a Shakespearean tragedy, where Reggie, the protagonist of this installment, is overcome with guilt over his actions that ultimately led to the current crisis. He struggles with thoughts, memories, questioning his basic humanity and grappling with the fact that he might be a sociopath, void of human emotion and unable to feel empathy or compassion.

After confessing to Kevin, Reggie leaves the group and goes off on his own, in an attempt to atone for his sins and shed the guilt that is festering within. But at the final moment, when it comes time to do what he needs to do, something happens which causes him to fully embrace his dark side. He becomes the sociopath he feared he might be. It is that poignant, tangible instance where an individual crosses the threshold to become the thing he loathes.

We have seen this archetype so many times before in literature, but it never ceases to fascinate me. What is it that finally causes someone to relinquish their hold on the last thread of their humanity?

Reggie says that we all envision ourselves as the hero, as the one doing the right thing. But sometimes we lose sight of what is truly right and the path that seems clear is the one that leads us to our ultimate demise.

I think: “Everyone is the hero of their own story.” You don’t find out who you really are until the world tests you…

While this is a brilliant story and beautifully illustrated, it is a very dark and disturbing tale. It forces us to look at ourselves in a way that is not comfortable. But in my opinion, that is the purpose of art, to make you uncomfortable and to challenge your established beliefs about the world and yourself.