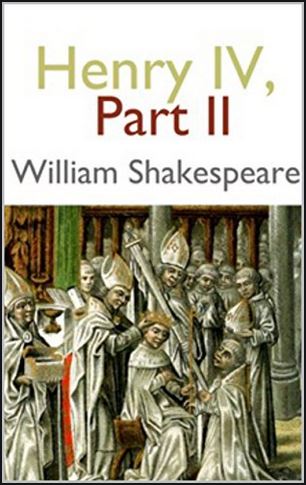 In my review of Henry IV, Part 1, I focused on Falstaff. In this second part, Falstaff is still a major character, and delivers some of the wittiest and funniest lines ever, full of sexual innuendo. But rather than rehash what I already covered, I figured I would focus on history, because this is a history, after all.

There is a history in all men’s lives,
Figuring the nature of the times deceased;
The which observed, a man may prophesy,
With a near aim, of the main chance of things
As yet not come to life, which in their seeds
And weak beginnings lie intreasured.
Such things become the hatch and brood of time;
And by the necessary form of this
King Richard might create a perfect guess
That great Northumberland, then false to him,
Would of that seed grow to a greater falseness;
Which should not find a ground to root upon,
Unless on you.

This passage beautifully expresses why history is so important. When we study the historical trends of individuals, societies, and cultures, we gain an understanding of their backgrounds, of the events that formed them. We can then trace the lineage to where individuals and cultures are in the present day. Using these insights, we can make educated assumptions regarding future trends and possibilities. And yes, there are infinite variables at play which will inevitably influence future events and outcomes, but we can make an educated guess as to likely responses to situations based upon past actions.

Let’s take a hypothetical example. If a country has a history of responding to external threats in an aggressive manner, it would be a reasonable assumption to expect the country to respond in a similar manner to future threats. So while individual leaders will certainly affect whether the retaliation is forceful or tempered, one can be prepared for a likely possible outcome.

I have to say that of all the Shakespearean histories I’ve read so far, I enjoyed Henry IV, Parts 1 and 2 the most. They are highly entertaining, elegantly composed, and rich in ideas and imagery. I’m thinking I will have to find some good film versions online to watch. If you have a recommendation, please share.

Although this play is a history, it is way funnier than some of Shakespeare’s comedies (just read Measure for Measure). In fact, the “historical” events seem to be more of a background for the antics of Sir John Falstaff.  A more apt title would be The Merrie Adventures of Sir John Falstaff. There were times I found myself ginning or chuckling out loud as I read. For this reason, I figured I would focus my post on Falstaff, and particularly how he embodies an archetype.

Falstaff is a completely unrepentant indulger in worldly pleasures. He has no qualms with being overweight, a cheat, a glutton, a whoremonger, basically, embracing everything society warns us against. And in spite of his wallowing in earthly delights, he does not suffer, but plods on happily regardless of the chaos swirling around him. His main concern is finding his next cup of sack.

With this in mind, we can look at Falstaff as the archetype of the fallen soul, who passes on all things heavenly to enjoy the pleasures of the flesh.

This quote made me think about Falstaff’s name, and I figured it might be broken down, such as “False Staff.” If the Good Shepherd uses his staff to lead humans along the Heavenly path, then the great “misleader” would use a false staff to lead others down the “wrong” path. I would also venture to assert that there is a sexual innuendo here too, that the staff that leads men astray is in fact the staff within their trousers.

But is the pursuit of physical pleasure truly a sin? Falstaff presents a defense of his actions.

But to say I know more harm in him than in myself,
were to say more than I know. That he is old, the
more the pity, his white hairs do witness it; but
that he is, saving your reverence, a whoremaster,
that I utterly deny. If sack and sugar be a fault,
God help the wicked! if to be old and merry be a
sin, then many an old host that I know is damned: if
to be fat be to be hated, then Pharaoh’s lean kine
are to be loved. No, my good lord; banish Peto,
banish Bardolph, banish Poins: but for sweet Jack
Falstaff, kind Jack Falstaff, true Jack Falstaff,
valiant Jack Falstaff, and therefore more valiant,
being, as he is, old Jack Falstaff, banish not him
thy Harry’s company, banish not him thy Harry’s
company: banish plump Jack, and banish all the world.

This for me is the key to understanding Falstaff. Should someone be banished for being human, for indulging in the desires that are natural to all of us? To banish one person for succumbing to the flesh would mean that all humans must be banished. And isn’t that what essentially happened, according to the story of Adam and Eve in the Garden of Eden?

Dost thou hear, Hal? thou knowest in the state of
innocency Adam fell; and what should poor Jack
Falstaff do in the days of villany? Thou seest I
have more flesh than another man, and therefore more
frailty.

There is a bit of Falstaff in all of us. Whether we repress those desires, or whether we choose to indulge ourselves, we cannot deny that they are a part of us, that this is an integral part of the human condition. Falstaff lets us know that we should not flagellate ourselves because we eat too much, or drink too much, or fornicate too much. What Falstaff teaches us that that we should accept ourselves, with our faults, because we all have faults. And once we accept those faults and can love ourselves anyway, then we can progress as individuals.

Thanks for stopping by. I’ll be reading Part 2 soon.