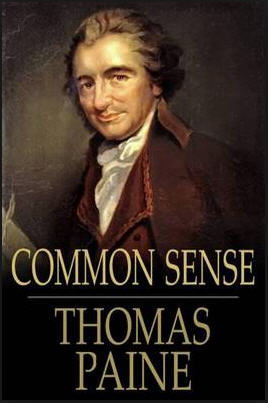 Last year for my Independence Day blog post I read and commented on the Declaration of Independence. This year I opted for Common Sense by Thomas Paine. I’d read it years ago in college in my “Survey of American Literature” class, so I understood the concepts that Paine was trying to convey, essentially making a “common sense” argument in support of independence for the colonies.

In the following pages I offer nothing more than simple facts, plain arguments, and common sense. (p 23)

Overall, I found this to be pretty dull reading. Paine is slow in getting to the point and as far as his simple facts go, he sure uses a lot of words to state them. That said, I approached the text with the intent of seeing what, if anything, is still relevant today. I found a couple of passages that could be applied to current issues.

The first issue I would like to address is marriage equality. In the US, we have a history of failing to acknowledge that discrimination based upon sexual preference is morally wrong. Many people are still attempting to pass legislation narrowly dictating what types of marriages should be accepted in this country. Essentially, this behavior is what Paine asserts is the defense of custom.

A long habit of not thinking a thing WRONG, gives it a superficial appearance of being RIGHT, and raises a formidable outcry in defense of custom. But the tumult soon subsides. Time makes more converts than reason. (pp 1-2)

I see the tumult finally subsiding, as demonstrated by the recent Supreme Court decision striking down the Defense of Marriage Act. The antiquated ideas that have been promoted as custom and tradition are finally being swept aside.

The next issue is that of commerce. Paine states that when commerce, or capitalism, becomes the main focus of a country, that country suffers. People become complacent and are not willing to take the risks necessary to advance society as a whole.

Commerce diminishes the spirit, both of patriotism and military defence. And history sufficiently informs us, that the bravest achievements were always accomplished in the non-age of a nation… The more men have to lose, the less willing are they to venture. (p 51)

Paine concludes his pamphlet by addressing the issue that has plagued us from the beginning: the separation of church and state. Today, there are still people who use religion as a reason for promoting laws, especially laws that deny or restrict the rights of others. We must always remember the words of those who founded this country and oppose the influence or religion on politics whenever it rears its head.

And here without anger or resentment I bid you farewell. Sincerely wishing, that as men and christians, ye may always fully and uninterruptedly enjoy every civil and religious right; and be, in your turn, the means of securing it to others; but that the example which ye have unwisely set, of mingling religion with politics, MAY BE DISAVOWED AND REPROBATED BY EVERY INHABITANT OF AMERICA. (p 73)

Have a happy and safe Fourth of July, and help keep freedom and equality safe in this country.

Comments Off on Applying “Common Sense” to Current Issues