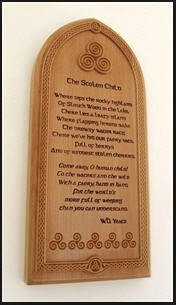 This morning I read “The Stolen Child” by W. B. Yeats. I’d read the poem in college, but it had been a while since I had last read it. The poem is a little too long to post on the blog, but you can click here to read it online.

The poem is basically an allegory of the loss of childhood fantasy and imagination which seems to be told from the perspective of the faery folk. The child believes in faeries and magic, but the “real” world of adulthood is poised to steal the child away from the realm of imagination and draw the child into the world of sorrow and weeping. In addition to the basic interpretation, I recall discussions in college about how this poem could also be symbolic of Irish culture being stolen by the English, or pagan traditions being usurped by Christianity.

Structurally, the poem works like a childhood song. There is a refrain at the end of each stanza which enhances the musical feel. I would not be surprised if someone put this to music. If I didn’t have to start work soon, I would search YouTube to see if anyone has done so.

There are a couple of passages that stood out for me on this reading which I’d like to look at closer.

We foot it all the night,
Weaving olden dances,
Mingling hands and mingling glances
Till the moon has taken flight;

What I found interesting about these lines is that they invoke an image of Celtic tradition, particularly with the weaving. I almost get a sense of artists designing Celtic knots. The words also conjure imagery of pagan dances. I can envision people dancing around a May Pole, weaving their ribbons as they dance in circles around the pole.

The other passage that I found interesting is:

We seek for slumbering trout
And whispering in their ears
Give them unquiet dreams;

The first thing that struck me is that trout do not have ears, so there is no way that anyone could whisper into a trout’s ear. There are a couple possible interpretations here. First, it could be the child’s imagination creating an image of a fish with ears, but also–and this is what I find the most thought-provoking–it could symbolically represent how faeries communicate with people in our realm. I suspect that Yeats viewed faeries as beings from another dimension, and that the threshold between these dimensions is easily crossed by children. As adults, greater effort is required to cross the span between realms. But the issue arises: how do beings from different planes of reality communicate? I think that Yeats was trying to express that faeries communicate in a non-verbal manner with people in our realm, that the words are projected directly into our psyches, similar to speaking into the non-existent ears of a fish.

The more I read Yeats’ works, the more I appreciate his genius. He can be challenging, but that is a good thing when reading poetry, since the thing about poetry which I love the most is that it seeks to express that which is difficult to express in a way other than through symbols. Cheers, and thanks for reading!