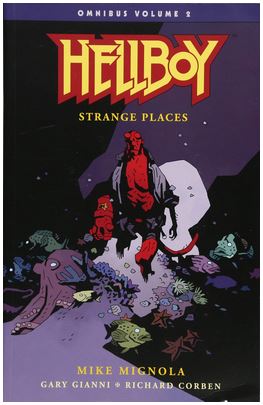 The more Hellboy I read, the more I appreciate the quality and depth of these graphic novels. This volume is brimming with literary and occult references: H.P. Blavatsky, the kabbalah, the tetragrammaton, Edgar Allan Poe’s “The Conqueror Worm,” and Samuel Taylor Coleridge’s “Rime of the Ancient Mariner,” just to name a few. So while the books can be enjoyed solely for the entertainment value and the artwork, there are also layers of references and symbolism that deeper readers will find engaging.

In the book, the conqueror worm becomes a symbol for the cyclical decline of the human race, out of which a new race of humans will ultimately evolve.

… and we are all to be nothing but food for a conquering worm. It’s true. The worm is ringing down the curtain on the human race. For a while now all will be gravel and smoke. But look back to the beginning. Mankind was born out of that kind of smoke. The first race of man, the pre-human Hyperboreans… and that was mankind’s golden age… And when the polar ice crushed that world, a new race of man raised itself up from the beasts. The second race. Human… Atlantis. Lemuria. Sumeria. Babylon. Human civilizations come and go, but the human race has endured. Down long, hard centuries…

A symbol that I find very fascinating is the crossroads, and Mignola uses it nicely in this text.

You are now standing at the very crossroads of your life. And all your roads lead to strange places.

This speaks to me on a personal and global level. From a personal perspective, I feel like I am at one of those points in my life where things are changing, and my life, stable for many years, is now filled with uncertainty and disruption. Not that this is bad, in fact it is good, but it is strange. And on the global level, I sense that the world is at a crossroads, that our entire reality is about to change, and we will all be thrust into a “strange place,” regardless of which road we collectively traverse. These are strange days, indeed.