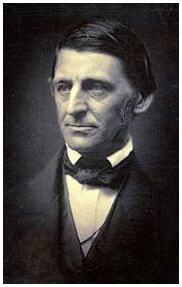 This morning I read “Two Rivers,” a poem by Ralph Waldo Emerson. I have read some of Emerson’s essays, but I was not familiar with his verse.

This poem is a lot more complex than it appears on the surface. The main question is, what are the two rivers? Emerson only mentions one, the Musketaquit, which I discovered was the Native American name for the Concord River. So it is possible that the two rivers are actually the same, just given different names. But I suspect there is more.

Since Emerson was one of the great American transcendentalist writers, he would almost certainly have incorporated transcendental ideas into his poetry. Considering this, it is possible that the two rivers are the physical world, which he perceives, and the spiritual world, which is evoked within him. Similarly, the rivers could be the two streams of consciousness: our ego-centric consciousness and our inner subconscious selves.

Finally, the poem includes references to both light and darkness. Therefore, the two rivers could represent the two aspects of a human being. The river of light would therefore symbolize enlightened humanity, aware of the spiritual connection between the individual and Nature. The river of darkness would represent ignorance, the base human urges, and the primitive state that writers of that period associated with the Wilderness.

This is a short, easy poem to read, and I encourage you to do so (click here to read it online). I would also encourage you to spend some time contemplating the symbolism. Something tells me there is a lot hidden within these lines.