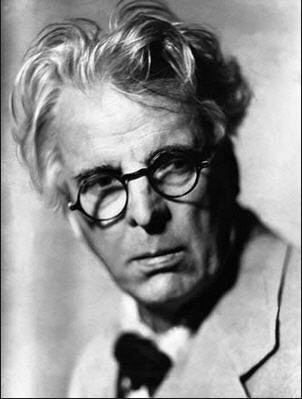 Red Rose, proud Rose, sad Rose of all my days!
Come near me, while I sing the ancient ways:
Cuchulain battling with the bitter tide;
The Druid, grey, wood-nurtured, quiet-eyed,
Who cast round Fergus dreams, and ruin untold;
And thine own sadness, whereof stars, grown old
In dancing silver-sandalled on the sea,
Sing in their high and lonely melody.
Come near, that no more blinded by man’s fate,
I find under the boughs of love and hate,
In all poor foolish things that live a day,
Eternal beauty wandering on her way.

Come near, come near, come near—Ah, leave me still
A little space for the rose-breath to fill!
Lest I no more hear common things that crave;
The weak worm hiding down in its small cave,
The field-mouse running by me in the grass,
And heavy mortal hopes that toil and pass;
But seek alone to hear the strange things said
By God to the bright hearts of those long dead,
And learn to chaunt a tongue men do not know.
Come near; I would, before my time to go,
Sing of old Eire and the ancient ways:
Red Rose, proud Rose, sad Rose of all my days. 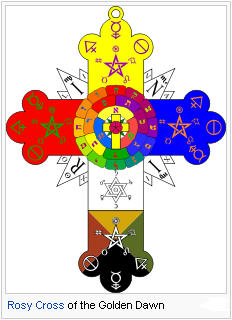 This is a pretty cryptic poem. The title suggests that there is Rosicrucian symbolism woven into the verse, the rose and the cross being the symbol of the order. Yeats would have been familiar with this symbol, being a member of the Golden Dawn (which used the Rosy Cross as a symbol) and he was familiar with various occult symbols. He is definitely drawing on occult symbolism as well as Irish mythology. Cuchulain and Fergus were part of the Irish Red Branch cycle, or Ulster cycle. The Ulster cycle is a collection of medieval Irish legends and sagas that influenced Yeats. For a brief overview, click here.

I get the sense that Yeats considered himself to be like the Druid, conjuring a realm of magic as he sings his sacred bardic poetry. The second stanza in particular has the feel of a mystical chant. He repeats the opening phrase of the stanza “Come near” three times, like an invocation. The fact that he says this three times would have had occult symbolism also, three being a mystical number. Finally, the following lines imply that Yeats is conjuring in a sacred language, that of God which is unknown to all but a select few.

But seek alone to hear the strange things said
By God to the bright hearts of those long dead,
And learn to chaunt a tongue men do not know.

I am not sure what language Yeats is referring to. If I had to guess, I would say either ancient Irish or the sacred Enochian language of angels, possibly both. (Click here to read the Enochian Dictionary online.)

In addition to the rose and the cross being a symbol of occult mysticism and evocation, I suspect that Yeats was also using these to represent the Irish renaissance. The rose would therefore symbolize the blossoming of Irish culture. The cross would represent a sort of crossroads in time, where the past is intersecting with the present. The rose or Irish culture, a symbol or rebirth, is blossoming in the center of the crossroads.

Although I took a class on Yeats in college, I confess that I am not that knowledgeable in regards to the Irish mythology in much of his poetry. If any of you have some additional insight into Cuchulain or the Ulster Cycle, please feel free to share it here.

Thanks, and read on!