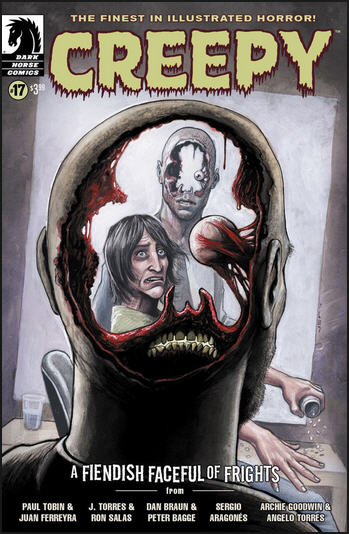 I picked this up the other day, figuring it would be a fun read as Halloween draws near, and that’s what it was—a fun illustrated horror magazine.

As a long-time horror fan, I used to read Creepy back when I was a kid and enjoyed it then, too. The thing about this publication that was most entertaining then and now is the host: Uncle Creepy. Each of the three tales in this issue include commentary by Uncle Creepy at the beginnings and ends. His sick humor makes the grim tales fun. And each of the tales has a twist at the end, which I also really enjoyed.

The first tale, “The Human Condition,” is kind of a dark spin on “It’s a Wonderful Life.” A grotesque spirit visits a young man who is depressed and contemplating suicide, showing him scenes of what would happen if he killed himself.

The second tale, “Arrangement of Skin,” is set in the Victorian era. It is about a taxidermist who receives unusual requests from an aristocrat seeking to preserve the life around him which he has become accustomed to.

The final story is “The Duel of the Monsters” which is set in a Spanish village in the foothills of the Pyrenees. It is basically a struggle between a vampire and a werewolf, each trying to gain control over the village by killing the other. But of course, there is the twist at the end. Sorry… no spoilers. You’ll have to read it yourself.

This comic is basically everything that I love about Halloween—that combination of humor and fright, of fun and fear. Happy Haunting, and keep on reading!