“Odyssey” by Homer: Book XXI – The Test of the Bow

In this episode, Penelope announces she will marry the suitor who can string Odysseus’ bow and shoot an arrow through a line of 12 axe heads. The suitors all fail, and then Odysseus, still disguised as a beggar, easily strings the weapon and shoots an arrow through the axe heads.

The first thing I considered when I read this episode was the symbolism of the 12 axes. My initial thought is that the axes represent the 12 zodiac signs. There is a lot of support for astrological symbolism incorporated into The Odyssey. For more information on this topic, I recommend visiting the Symbol Reader blog. Search the page for posts on The Odyssey. There are several very good posts there on astrological symbolism in the text.

When Odysseus asks for a try at the bow, the suitors are opposed. Telemachus speaks up and strongly asserts his right over who can use the bow. The bow, therefore, becomes a symbol of authority over the household. Once the bow is placed into Odysseus’ hands, then he will once again be master of the house.

Mother, as to the bow and who may handle it
or not handle it, no man here
has more authority than I do—not one lord
of our own stony Ithaka nor the islands lying
east toward Elis: no one stops me if I choose
to give these weapons outright to my guest.

Finally, there is another analogy regarding the bow that is worth noting. The narrator (which we can assume is Homer as poet/bard) establishes a connection between Odysseus’ bow and the harp of the poet/bard. Homer is asserting that warriors and poets are similar in essence, that deep down in the psyches of both, there is a shared attribute which both the bard and the warrior possess.

But the man skilled in all ways of contending,
satisfied by the great bow’s look and heft,
like a musician, like a harper, when
with quiet hand upon his instrument
he draws between his thumb and forefinger
a sweet new string upon a peg: so effortlessly
Odysseus in one motion strung the bow.
Then slid his right hand down the chord and plucked it,
so the taut gut vibrating hummed and sang
a swallow’s note.

While I have been consistently reading the Witchblade saga, I have not posted on it in a while (my last one was for issue #176). The reason being that the recent issues were just not blog-worthy. I enjoyed them, but they lacked the depth of content that made for an interesting blog post. This issue, though, inspired me to write.

The story takes off immediately with Sara, clad in a Ramones tee-shirt, battling a six-headed Hindu god. My interest was instantly piqued. She defeats the god and is approached by two men who said this was a test. They escort her to meet their “employer,” a woman named Amaryllis who appears as an archetype of a warrior goddess. She tells Sara she is in need of an agent who “trafficks with the supernatural. Someone who walks in the world behind our world.”

I require someone with power, and experience in wielding it. Everything I’ve done, everything I’ve gathered here, is so I can keep the world safe from the evil at its edges. I need a knight to serve me, Sara. I need you.

I am one who believes in parallel dimensions, so the idea of someone being able to pass through the veil and visit hidden worlds is something I find fascinating. In the past, the writers of Witchblade have drawn on mythology and the supernatural, and I closed this issue with the distinct impression that the creative team is returning to this formula, which I am very happy about. I’m trying not to raise my expectations too high, but I have a good feeling about the direction the story is taking. I suppose more will be revealed next month. I’ll be sure to let you know my thoughts–good, bad, or indifferent. 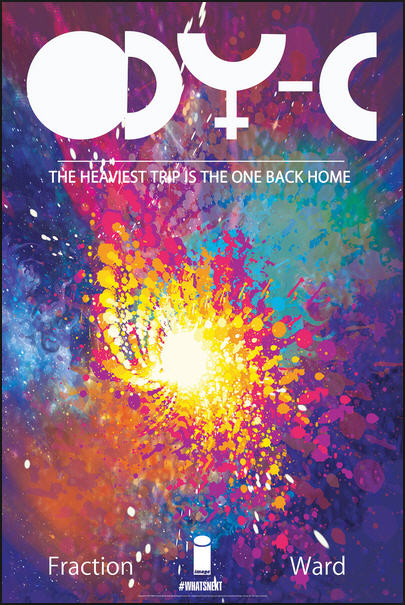 I saw this on display at the comic store and it looked interesting. The owner said it was a retelling of the Odyssey with the genders reversed. I did not buy it at first, but after I got home and thought about it some more, I decided I should read it. So I went back and picked up a copy.

I’m kind of on the fence about this one. There are things I liked about it and things that didn’t work for me. I guess I’ll start with the things I liked.

The first thing that struck me was the map and timeline at the beginning. These are big multi-page foldouts that are lavish and detailed. The timeline, although a little confusing, builds the mythology on which the tale is constructed, while the map provides an overview of the area through which the female warrior Odyssia (the central character in this retelling) must travel.

Finally, I thought the artwork was very good. The drawings are rich and vivid, and the color schemes are surreal and psychedelic. Visually, I find this comic stunning.

What didn’t work for me in this first issue is the actual storyline and writing. It is kind of choppy and disjointed. I am hoping that this is just the result of the writer establishing the foundation of the tale, which I concede is no easy task. For this reason I am going to reserve judgment until I am a few issues into the series. I feel there is potential and if the writer can focus a little more that it will be a great graphic series. I’ll commit to two more issues before I make my final decision on whether to continue or not. I do hope that the writing improves because I am very intrigued by the concept.

Thanks for stopping by and I will share my thoughts on issue #2 as soon as it is released.

“Cuchulain’s Fight with the Sea” by William Butler Yeats

This poem is too long to include in this post. For those who need, here is a link to the full text hosted on the California State University website:

Cuchulain’s Fight with the Sea

In order to understand this poem, you need to know the three key characters: Cuchulain, a warrior from Irish mythology who served under the rule of Conchubar; Emer, who is Cuchulain’s wife; and the swineherd, Cuchulain’s son who is unnamed in the poem. The basic story which the poem conveys is a reverse Oedipus tale, where Cuchulain mistakes his son and slays him and is then overwhelmed by guilt.

In the beginning of the poem, the swineherd returns home to his mother who had instructed him to watch the shore for Cuchulain’s return. Anguished by her husband’s failure to return, Emer seems to perform an act of sorcery.

Then Emer cast the web upon the floor,
And raising arms all raddled with the dye,
Parted her lips with a loud sudden cry.

Emer then instructs her son to go and camp near Conchubar’s camp where Cuchulain is and to challenge him. Cuchulain, eager for glory, fights with his son and ultimately kills him.

After short fighting in the leafy shade,
He spake to the young man, ‘Is there no maid
Who loves you, no white arms to wrap you round,
Or do you long for the dim sleepy ground,
That you have come and dared me to my face?’

‘The dooms of men are in God’s hidden place,’

‘Your head a while seemed like a woman’s head
That I loved once.’

Again the fighting sped,
But now the war-rage in Cuchulain woke,
And through that new blade’s guard the old blade broke,
And pierced him.

‘Speak before your breath is done.’

After slaying his son, Cuchulain is wracked with guilt and broods alone, inconsolable. Conchubar fears that Cuchulain will become overwhelmed with grief and will ultimately slaughter all the members of the party. This sets the scene for the final part of the poem, which to me is the most interesting.

Then Conchubar, the subtlest of all men,
Ranking his Druids round him ten by ten,
Spake thus: ‘Cuchulain will dwell there and brood
For three days more in dreadful quietude,
And then arise, and raving slay us all.
Chaunt in his ear delusions magical,
That he may fight the horses of the sea.’
The Druids took them to their mystery,
And chaunted for three days.

Cuchulain stirred,
Stared on the horses of the sea, and heard
The cars of battle and his own name cried;
And fought with the invulnerable tide.

There is a lot of symbolism woven into these lines. First, we have number mysticism, the numbers ten and three both repeated, emphasizing their importance. The number ten is a reference to the number of sefirot that comprise the kabbalistic Tree of Life, which figures prominently in Golden Dawn philosophy with which Yeats was well versed. Then the number three represents the trinity, as well as the three stages in the cycle of life: birth, life, and death. There are many other mystical connections with the numbers 3 and 10, but this should suffice for the purpose of this post.

The Druids then perform a chant with the intent of evoking “delusions magical.” Basically, the Druids are chanting mystical poetry which after a period of time causes Cuchulain to slip into an altered state of consciousness. The sea is a symbol for Cuchulain’s subconscious. He is thrust into his own psyche and there does battle with himself and his memories. He has no choice but to vanquish his inner demons and self-hatred; if he fails, he will drown in the sea of sorrow and lose touch with the realm of waking consciousness.

This poem works really well as a psychological allegory, but also contains some great mystical and mythological symbolism. I am pretty sure that there is more to this poem than what I included here and that someone who is more versed in Irish mythology would be able to draw deeper interpretations. If you uncover any other symbols or allusions in this poem, please share them in a comment.