“A Brief History of Time” by Stephen Hawking

This book has been on my list for a while and I finally got around to reading it. I had high expectations for a couple reasons. First off, I am fascinated by theoretical physics. Wormholes, black holes, quantum mechanics, string theory, all that stuff I find intriguing. But more importantly, as a technical writer, I am very interested in how other writers of scientific and technical information are able to present complex ideas in a manner that is digestible for the lay person. From this perspective, Hawking excels in communicating deep and complicated ideas in a clear and concise manner that we commoners can grasp.

There is a lot of deep information and I could not do the book justice by trying to summarize it. So instead, I will cite a few quotes that sparked some thoughts and questions for me. The first one concerns event horizons associated with black holes.

So I can accept that our physical bodies cannot surpass the speed of light, but what about consciousness? I could not help but wonder whether consciousness is the one thing that can travel faster than light. If so, is it possible for humans at some point in our future evolution to develop the ability to project our consciousness into a black hole and return back through the event horizon? I think these are valid questions. It has already been proven that consciousness affects quantum particles on a subatomic level. I feel that it is possible for humans to use consciousness to explore regions of time and space which are currently beyond our physical grasp.

Another passage that stood out for me was a question regarding whether the universe was created via the big bang or whether it is eternal and has always existed. As Hawking points out, the answer to this question has profound impact on religious ideology, but not in the way I would have expected.

With the success of scientific theories in describing events, most people have come to believe that God allows the universe to evolve according to a set of laws and does not intervene in the universe to break these laws. However, the laws do not tell us what the universe should have looked like when it started—it would still be up to God to wind up the clockwork and choose how to start it off. So long as the universe had a beginning, we could suppose it had a creator. But if the universe is really self-contained, having no boundary or edge, it would have neither beginning nor end: it would simply be. What place, then, for a creator?

When I first read this, it seemed completely opposite to what I conceived. I would have thought that the big bang theory would be contradictory to the concept of God as creator of the universe. But the more I think about it, the more it makes sense what Hawking asserts. If the universe it eternal and infinite and has no beginning or end, then how could a divine entity create the universe? How does consciousness come into play regarding the creation of the universe? Again, challenging questions for me to contemplate.

Finally, I would like to cite Hawking’s closing paragraph regarding the elusive unified theory of physics.

However, if we do discover a complete theory, it should in time be understandable in broad principle by everyone, not just a few scientists. Then we shall all, philosophers, scientists, and just ordinary people, be able to take part in the discussion of the question of why it is that we and the universe exist. If we find the answer to that, it would be the ultimate triumph of human reason—for then we would know the mind of God.

Understanding existence is in my opinion the proverbial Holy Grail. Who has not asked the questions: Why are we here? How was the universe created? Are there parallel dimensions? Can we travel through time? It is possible that one day physicists will find answers to these questions. I for one believe that when these answers are discovered, that humanity will see a bridge between science and mysticism, the likes of which we have not seen since the days of alchemy. I don’t expect to be around for that, but I would like to think that I will have participated in the global conversation.

Thanks for stopping by, and keep reading, thinking, and exploring!

On a recent visit to Comic Envy (my favorite local comic store), the manager was kind enough to give me a comp copy of this comic. She said that she thought I would enjoy it and I most certainly did.

The story features a gay bio-engineer named Keith who is part of an expedition to Mars. The craft gets pulled into a wormhole and the crew escapes via escape pods. They land on a planet rich with surreal plants and animals, including some that are seriously ferocious. Keith is rescued by the inhabitants of the planet, which is named Kaptara. It is discovered that the wormhole was created by an evil dude named Skullthor who has traveled to Earth in order to rule there. The Kaptarans assure Keith that they will go to Earth to free the planet from Skullthor.

This definitely falls into the space-fantasy genre, which I have an affinity for. The writing is very good, as is the artwork. There is also a good serving of humor in here, which works nicely. It seems to have struck a good balance between sci-fi, fantasy, and comedy.

So the question is, do I add this to my list of comics that I will follow? I think I can swing it. There are a few arcs that have come to a close recently, and one which I am intentionally dropping, so I think I can take this on. It certainly has potential based upon this first issue. I’ll probably pick up the next issue today. I’ll let you know my thoughts on that one soon. 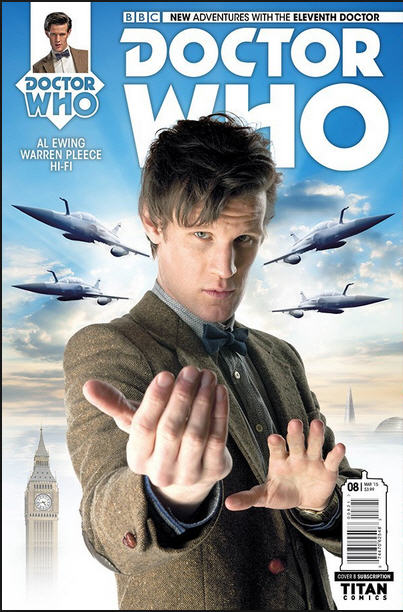 This is one of the better issues in this series. It ties up a lot of loose ends that have been bothering me for the last several installments, and it deals with three topics that fascinate me: hope, fear, and God.

In issue 7, Alice’s mother reappears, seemingly to have returned from the dead. The Doctor expresses his views on the impossibility of this occurring, which angers Alice. She confronts the Doctor, questioning how in a universe of infinite possibility that one can claim there is no hope of something deemed impossible happening.

Are you seriously going to stand there and tell me there’s no way? Not in all of time and space? We see miracles every single day, but not today? Is that what you’re saying? This time there is no hope?

While Alice is arguing the validity of her mother’s return, Jones and ARC are suffering from a fit of paralyzing fear. The Doctor makes an astute observation on the frequent human response to fear.

Fear, is it? That what came over you before? Does tend to make people violent.

Finally, what I found most intriguing about this issue is the debate about God’s existence and the definition of God. It is discovered that the two warring alien races began their war over a dispute about God. They each sent an explorer through a wormhole and they radioed back that they saw “the face of the creator,” and then never returned. Each race developed their own theory about the creator, and their disparate views resulted in the prolonged war.

As I read this, I could not help thinking how it is an accurate portrayal of our world. Fear causes us to act violently towards other. Ethnocentric views of what defines God have fueled wars for generations. In spite of this, hope for peaceful coexistence and enlightenment still continues. I must admit, I was impressed on how the creative team was able to express all this in a small comic.

Comments Off on Doctor Who – Eleventh Doctor: Issue 8 (Hope, Fear, and God)