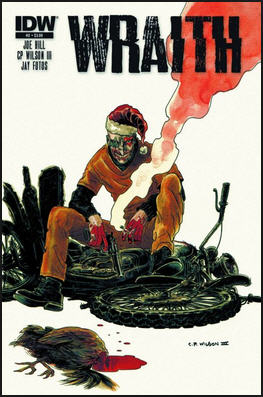 So I really liked the first issue of this comic, but this one, not so much. (Click here to read my review of Issue #1.) Basically, it’s violent horror that seems to rely too heavily on harsh language to drive the dialog. I’m by no means offended by the language, or by the gratuitous violence in this issue. I just feel that it is noticeably lacking any of the really cool symbolism that permeated the first issue.

In this installment, three convicts are being transported in a prisoner van: a child rapist, a sideshow geek, and someone whose crime is not revealed. During an escape attempt, the van crashes and there are some serious injuries. The convicts bring the two captured guards to an abandoned film studio and wait for the arrival of an accomplice, who at the end of the issue turns out to be Charlie Manx from the first issue.

I suspect that something is being set up in the storyline and that this is essentially an introduction to the characters. The one thing that did pique my interest is the convict whose crime is a secret. Of all the characters in the issue, he seems the most sane and kind-hearted. This leads me to suspect that there will be some bizarre twist. What is it that they say about psychopaths—they seem like the nicest people?

I’m going to proceed on faith that this is just a transitional issue and that once the story begins to flesh out, that we will see more of the writing that I found so fascinating in the first installment. I’ll let you know once Issue #3 is released.

Comments Off on Wraith: Issue #2